1969. The entire world watches the Apollo’s command module reentering the earth’s atmosphere. Unbeknownst to everyone, an ingenious cooling process takes place. An ablative layer is being used and the heat on the surface of the vehicle is carried away by particles ejected during the fall. The mission is a success.

50 years passed. A research group from the Bilkent University in Ankara (Turkey) uses this idea of ablation cooling with the objective to interpret a new phenomenon of laser-matter interaction they have just observed, leading to greater ablation efficiency. At low average power and moderate repetition rate, the amount of heat accumulated with femtosecond pulses is negligible. But with a higher repetition rate, of the order of GHz, the heat in the material is greatly increased with no need to use a high energy laser. Usually, this heat leads to a degradation of the cutting or drilling quality. Yet in the GHz case, an original mechanism is set up. The generated heat, after having contributed to the increase of the ablation efficiency, is evacuated by a mechanism like the one that protected the Apollo capsule. 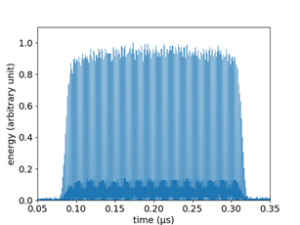 In partnership with the CELIA-Bordeaux, we tested this idea by using our Amplifier platforms (Satsuma and Tangor) and incorporating a specific GHz burst source. We ended with amazing results:

> we broke a new ablation-rate record (42.3 µm3/µJ or 2.5 mm3/min/W) for silicon, a material used in many industrial applications,
> molten material was negligible compared to the volume ablated (less than 3% for a burst energy more than 10 J/cm2)

In the end, we experimentally demonstrated that silicon ablation with high efficiency and better quality is obtained using a burst with 200 pulses at 0.88 GHz repetition rate.

GHz laser processing shows that ultrafast lasers can reach ablation efficiencies to those achieved with nanosecond lasers, with limited and controlled heat-related side effects. This translates both a productivity increase which will certainly be of great interest for our industrial clients, and an improved control over thermal effects, and new mechanisms of interaction for our scientific clients to study. By using our patent-pending technology and optimizing several inter-related parameters such as pulse energy, number of pulses per burst, as well as intra-burst and inter-burst repetition rates, we can now offer you faster products which will be more efficient, precise, and giving you results of improved quality.

Fig.2: Representation of our GHz solid-state oscillator beside a Tangor.

For more information on the subject, please contact us.