X-Pulse project aims to build a prototype of pre-clinical imaging system, based on x-ray sources generated by ultrafast lasers, specifically dedicated to the early detection of breast cancer. Headed by the “Alliance Technologique Laser et Santé”, a French consortium of companies and labs from the Nouvelle Aquitaine region, the first encouraging results have been presented last September 12th at the Institut d’Optique d’Aquitaine.

Tests have been carried out with an ultrafast laser, called MAGMA 25 manufactured by Amplitude, partner of the project. 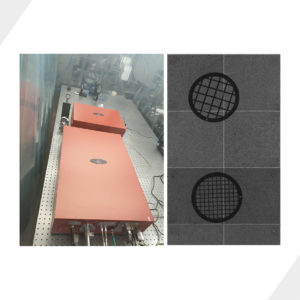 How does it work ?

> Lasers pulses are focused on a metallic element.

> They create an intense x-ray source which illuminates samples.

By using the unique characteristics of x-ray laser sources, it will bring:

> a better resolution and sensibility of the final images, so cancerous tumors can be detected earlier,

> a reduction in the dose of x-rays and the length of the procedure.

These initial tests were very successful and validated the team’s technological choices regarding the integration of this laser X-ray source into a preclinical mammographic imaging system. The latter will be developed during the second phase of the project and will be installed in the project premises recently received at the Institute of BioImaging (IBIO) at the University Hospital of Bordeaux.